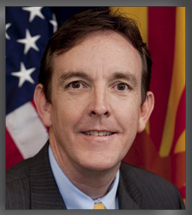 The National Association of Secretaries of State (NASS) appoints a  member Secretary of State to be the liaison to the Administrative Codes  and Registers (ACR) Section. The current NASS liaison to ACR is Ken Bennett of Arizona.

The statewide office is the newest chapter in a record of public service that spans 25 years. It’s also the latest distinction for Bennett – an Arizona native and small-business owner.

Bennett began his legislative career in 1998 when he was elected to represent the residents of Legislative District 1. He served four terms in the state Senate – from 1999 to 2007 – and served as Senate president his final four years before being term-limited from office.

Earlier, in 2007, Bennett received the Polly Rosenbaum Award from the Arizona State Library, Archives and Public Records in recognition of his support for the State Library’s mission to preserve Arizona history and ensure access to state information and records. He served as Republican Floor Leader in 2002, and was chairman of the Senate Education Committee in 2001 and 2002.

Prior to joining the Legislature, Bennett was a member of the Arizona State Board of Education for seven years. He was president of the board in 1996 and 1998. Bennett also served on the Arizona Charter Schools Board for three years, and was a founding member of the Education Leaders Council in Washington, D.C.
Bennett’s career in public service began in 1985 with his election to the Prescott City Council. He completed a four-year term, and was named mayor pro-tempore in 1988.

After leaving the Legislature, Bennett re-entered the private sector to work with companies in the development of alternative energy sources and energy-efficient building technologies. Currently, he is chairman of the board of directors for Prescott-based Global Building Systems, Inc., and Energy Tech America. He also is a member of the board of directors for Cancer Treatment Centers of America (Western Regional Medical Center, in Goodyear). Bennett was CEO of Bennett Oil Company, a family fuel-distribution business, from 1985 to 2006. He continues on its board of directors.

A fan of sports and music, Bennett also is active in the Church of Jesus Christ of Latter Day Saints. From 1978 to 1980, he was an LDS missionary in southern Japan. Bennett is an Eagle Scout, and graduated from Arizona State University in 1984 with an accounting degree.

Bennett was born in Tucson in 1959, now resides in Phoenix with his wife, Jeanne Tenney Bennett. They have three grown children – Ryan, Dana and Clif – and two grandsons.