These officers were elected. The next election will be held in the summer of 2010. 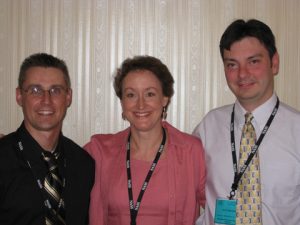 She is currently serving as President of the Administrative Codes and Registers (ACR) section of the National Association of Secretaries of State, and has been a member of ACR since 1998. She served as the ACR Pacific West regional representative from 2000 to 2004, and was the 2002 Summer Conference Chair in Providence, Rhode Island. She was ACR Secretary/Treasurer from 2004 to 2006 and Vice President from 2006 to 2008.

Julie has Bachelor’s degree in German Language from the University of Oregon, Eugene, Oregon. She and her husband Dave have two grown children, Stephanie and Kevin.

John Martinez is the Director of the Administrative Law Division of the New Mexico Commission of Public Records – State Records Center and Archives.  He earned his Bachelor of Arts, Magna Cum Laude, in History with a minor in Spanish from Brigham Young University.  After graduation he attended the University of Texas at Austin where he earned a Master of Arts in U.S. History, with a focus on the American Southwest.  After leaving Texas, he worked for a large financial institution in California where he worked in human resources and corporate security.  Eight and a half years ago he accepted a position at the New Mexico State Archives in Santa Fe.  While at the state archives, he was introduced to state rules through the archives’ collection of non-current rules.  Shortly thereafter, he was hired to direct the Administrative Law Division.

Scott Cancelosi (pronounced Cancel-oh-see) is your ACR Secretary/Treasurer/Historian, and is a member of the ACR Web site Committee. This committee maintains the ACR Web site www.administrativerules.org.

Scott has been a member of ACR since 1997. He has chaired the Robert J. Colborn Award Committee; is a founding member of ACR’s esteemed Rulettes; and also maintains the underground Web site ACR AfterDark.

Scott has been with the Arizona Secretary of State’s office since 1996. He is Director of the Public Services Division, sometimes referred to as the “publications” division under Secretary Ken Bennett. The division chapters and files legislative bills, prints Arizona administrative rules and publishes office publications in paper and electronically at www.azsos.gov. Scott is also charged with many office special projects such as the Arizona Blue Book and Annual Report. He has expertise in pagination of documents and the maintaining of their structural integrity when posted to the Web. He is the office’s multimedia guru, and is: graphic designer, photographer, videographer, and web grunt. He serves as the office’s crisis manager as Continuity of Operations (COOP) Coordinator and Pandemic Coordinator.

Scott is the treasurer of the Arizona Historical Advisory Commission (AHAC) and is webmaster to the commission’s centennial Web site, www.azcentennial.gov. AHAC has been entrusted to help plan Arizona’s Centennial in 2012 with its main function to approve legacy projects.

Scott has a Bachelor’s degree in journalism and public relations from Northern Arizona University, Flagstaff, Ariz. He sings and plays the guitar and has appeared with Ken Bennett playing at office functions. He supports the off-road race team, Wide Open MotorSports as webmaster (www.wideopenmotorsports.us) and enjoys downhill skiing.